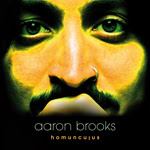 Wave goodbye to 2018 and say hello to the late sixties and early seventies groove. All-American Aaron Brooks moved in 2011 to Germany with his far-out psychedelic rock band Simeon Soul Charger and over the years they managed to build a large fanbase. Honestly. I don't know. It might have been large. For instance. The barking mad teutonic people adores the music of The Hoff!! However. The SSC group disbanded some five years later (2016) and Brooks decided to keep calm and carry on writing groovy songs for the far-out solo effort: Homunculus. It's been nicely produced by Yogi Lang (RPWL) and Kalle Wallner contributed a lot of guitars.

Spooky, quirky, and far-out. Brooks are taking you out on a vivid trip where the singer/songwriter melodies meet psychedelic folk rock. Definitely 'out there' and not of this earth or solar system for that matter. It's planet weird and strange space art-rock at its fullest. The weirdest part of all. Yours truly found the melodies to be strangely intriguing. You know, like ravishing purple alien women on bicycles. Oi! Sexist bastard! Throwing stones already? You can't look away. That's what I'm trying to say. You simply can't look away or in this case stop listening to the enchanting melodies.

One minute it's Jesus Christ Superstar The Movie/Musical meet Muse. The next, Sparks vs. The Doors. Or why not Leonard Cohen vs. Aphrodite's Child (666). The piano often plays a leading role, as well as strings and orchestral percussion. Brooks' sad crystal clear voice soar over the arrangements and you need to embrace the quirky concept from the opening words of "Consume" to the closing track of "Digital". In the hands of anyone else, it might sound like a bad idea and poor business. However. This crazy American would appear to have grasped the concept of being strange AND interesting. Simply keep the orchestra going and never stare directly at purple alien women on bikes? Definitely groovy and far-out, it's Homunculus.