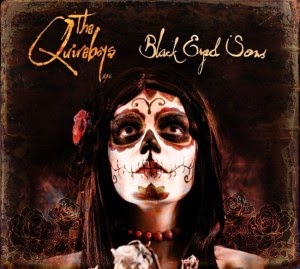 Still alive - 30 years down the line! This three-disc package marks the 30th anniversary of the band formerly known as The Queerboys and what a top value deal you receive. The Geordie and bandanna version of Rod Stewart treat us with a brand new studio album (Black Eyed Sons - 10 tracks), the live acoustic and unplugged at Sweden Rock CD (Unplugged in Sweden - 10 tracks) and last but certainly not least, the live DVD (Beautifully Cursed in London - 19 tracks). Keeping the World Cup Football in Brazil in mind, this is one helluva' impressive hat-trick (2CD, 1 DVD) worthy of Ronaldo, Messi, or any other class act player (Neymar, Mandzukic, Suárez, Aguero, Dzeko, Lukako).

The new studio album, "Black Eyed Sons", exactly what Jagger recommended and then some. I believe that some of these songs are leftover from the Beautiful Curse sessions? Produced by Chris Tsangarides and represents yet another career high for a band that simply can do no wrong at this particular moment of time. It's the classy album with roots buried in the U.K. tradition of Rolling Stones and The Faces. In fact. Someone give Rod immediately a call, "Julieanne" is the cheeky and fun attempt at beating the Highlander at his favourite game. Big grin stretched across the faces of fans all around the world as this is the excellent ballad which only Rod could do justice in the past. Actually. KISS did something similar with "Hard Luck Woman" and Peter "Not-Quite-Rod" Criss at the mike. Not that Spike could do any other ballad with his whiskey and barbwire voice.

...And while you're at it, give the Stones a ring. "You Never Can Tell" and "Mothers Ruin", are calling from the year of 1974. The latter may remind you of "Fool To Cry" somehow? Nothing new or fancy (or "A little bit of what you fancy"?), it's basic as well as classic rock from the opening note of "Troublemaker" to the closing ditto of "Monte Cassino" (Lady Lane). Pure, all out energy with fun tunes and attitude. This is must have or you'll miss out on the next trip back to the rock'n roll future of Mick, Rod, and Spike.

The Unplugged In Sweden CD, perhaps the least interesting of the three discs and it's still a jolly good time. Spike, Griffin, Guerin, and Weir form the acoustic four at the main stage of 2013's Sweden Rock festival – in front of 40,000 vikings and vagabonds. They truly are a top-drawing, concert attraction and in between banter from Spike is party on as always and I quote, "I'm drinking non-alcoholic cider- I'm just kidding". Or why not the classic line of "this next song is about drinking... [pause]... and women". And how can you not enjoy acoustic versions of "Have A Drink On Me", "Roses & Rings", "I Don't Love You Anymore", "7 O'Clock"? etc. Excellent. Unfortunately, they've managed to screw up the printed track listing on the package. No biggie though.

The DVD: London, let me hear ya' - We're The Quireboys and this is rock'n roll. Except they kick off the show with "Black Mariah" instead of "This Is Rock'N Roll". Well... it's still rock'n roll, but you know what I'm getting at. Spike do enjoy his pint or ten while performing and he's at least semi-pissed towards the end of the show. Not that it matters since he's the old school performer and not some posh t##t with an attitude. Down to earth and having a drink with the audience instead of looking down from above. You get all the goodies such as, "There She Goes Again", "Tramps & Thieves", "Hey You", "7 O' Clock" and "I Don't Love You Anymore", the best ballad Rod never wrote. "Homewreckers & Heartbreakers" really comes alive like your vintage (pre-image) Whitesnake. Surprise of the bunch, "Mona Lisa Smiled", such a great tune and perfect sing-a-long on stage. The pure joy of performing live goes through the screen and in to your living room and the 7 CAM shot DVD featuring the London leg of last year's Beautiful Curse tour is a treat with a capitol T.

DVD bonus material: band interviews, the promo video of "Mother Mary" and the acoustic live in the studio versions of "Mother Mary", "Beautiful Curse", "27 Years", "Devil Of a Man". Interviews, in between songs, speak of old tour memories, Monsters Of Rock, etc. Spike inform us about moving down from Newcastle to London at the mere age of 16 and playing the London scene for 6, 7 years until they finally received their first recording contract. "Keeping English Rock'N Roll alive - that's what we were put on this earth to do is to keep English Rock'N Roll alive. Can't do anything else", Spike proudly says and yours truly can merely nod and agree. He's probably shite at football. That's one more thing in common with Rod Stewart :) Highly recommended.
www.quireboys.com
Posted by ROCKUNITED.COM at 6:58 PM