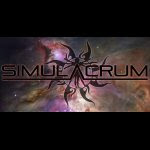 Regular readers of this site may know that I am a prog metal fan and some of my favourite bands are Dream Theater and Symphony X. SIMULACRUM is a new young prog metal band from Finland and these guys from Turku really surprise me with their first EP. The band was founded 12 years ago by Christian Pulkkinen and the name of the band was adopted a couple of years later. The EP contains four tracks and the music is true prog metal and I mean REAL prog metal! However these guys really have a distinct sound and originality like I have not heard before in a long time.

The mini album opens with Master And The Simulacrum and this song features a lot of musical diversity and immediatlely shows the astonishing musicality and playing skills of these young Finnish rockers. Follow up The Depraved is rather heavy with a dominant role for singer/shouter Niklas Broman, while Battle Within takes me back to the seventies as it reminds me of Kansas although the keys and guitar solos actually sound rather experimental and even jazzy at certain points. Last but not least Simulacrum comes up with the darkest song of the entire EP called The Beginning Of Nothing; a true prog metal gem which should really amaze listeners who like the rather unknown band Outworld.

These guys really know how to handle their instruments and this EP is extrremely good stuff for die-hard prog metal fans like me...

Simulacrum was already band of the month in Inferno metal magazine and I really think these guys have a great future ahead of them.
Their first complete album is already finished and I can't hardly wait to hear it and to see these guys in the flesh. Higly recommended!!

Posted by ROCKUNITED.COM at 8:06 AM