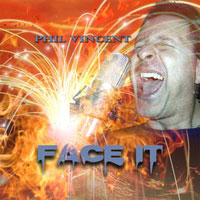 The mighty oak that is Phil Vincent has been an appropriately solid presence on the melodic rock scene over the past 16 years, churning out no less than 26 albums, 14 of which have been solo efforts. Although he doesn’t tend to make jaws drop, his releases have never been less than entertaining, so I was happy to see this new double CD, even if the cover made me want to run and hide.

The reason that the new album “Face It” comes packaged with “Solar Flare” is that the latter was released last year as a digital only purchase. This, therefore, is Phil’s gift to fans of a physical copy at no extra cost. As usual. PV has done almost everything here, from playing to singing to producing, and I have to say he’s done a bang up job. The sound is clear, with clean vocals and some truly stomping guitar riffs. “Is This All There Is?” for example, thunders along like a freight train, and overall it’s an album that lives or dies by the sheer power contained in the riffs. I may not have heard all of Phil’s albums, but I’ve heard most, and I have to say that “Face It” shows a remarkable staying power, the end result being one of his best. His vocals sound great, his guitar is intricate, the songs are hard hitting as well as melodic, and whilst he still doesn’t give me that “wow” factor I am very happy to listen to this for the foreseeable future.

Inside the double pack you get an excellent shot of Phil’s “gurning” face, but hiding behind that is the bonus album “Solar Flare”. It’s a twelve track full album, and in all honesty stand up very well to “Face It”, although the production feels a bit rougher where vocals are concerned. Nonetheless, it’s another solid offering that will be thoroughly enjoyed by existing fans. Available from Phil’s website or CD Baby, I heartily recommend this bargain double pack of hard, melodic rock.