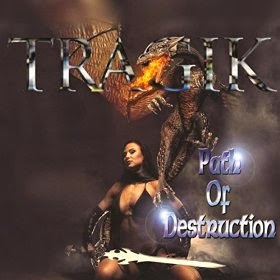 Phil Vincent has released a lot of albums. By my count, ‘Path Of destruction’ is his nine hundred and twelfth, although I may be a few out. Buolt like a brick shithouse and determined to bring the same weight to his music, Phil is never less than entertaining, and although the Tragic stuff still sees him write everything, the addition of extra musicians does seem to bring a new dimension to his songs.

This latest album sees Phil teaming back up with his Legion cohort and serial guitar guest Vince O’Regan, who pops up for lead guitar duties, with other long term cohort Damien D’ercole adding his own guitar licks to the songs. Opener ‘Look At me Now’ is a catchy piece of work, accentuated by Eric Ragno on keyboards, and manages to be punchy as hell with a stiff melodic backbone. It’s great to hear Phil’s vocals improving slightly, with some good harmonies bolstered by a crystal clear production. It’s a pretty accurate indicator for the rest of the album, which mixes crunchy riffs, melodic choruses and some sweet guitarwork throughout. Worthy of note is track three, ‘All The Time In the World’, which ranks as one of Phil Vincent’s most melodic pieces of work, culminating in a skin chafing solo from O’Regan.

The run time of 55 minutes is bolstered by track six, where it all goes ambitious with a five part song called ‘Lake Of Tears’, clocking in at nearly seventeen minutes. To be honest this doesn’t mean that Phil has gone all prog rock or anything (thankfully), and the time flies by, even if the reading of it as a single track means I can’t listen to the parts as individual tracks without faffing about. A little later the album closes with ‘Thank You’, a sweet song of thanks that could be directed towards a mother or God.

‘Path Of Destruction’ can stand proudly at the top of the Phil Vincent catalogue, providing 55 minutes of quality melodic rock mixed with big riffs and very tuneful vocals. You can’t fault his ambition in chucking in a six part song, nor his talent for catchy choruses, but you can fault the decision to stick a picture of a fake breasted scantily clad lady on the inner sleeve (not to mention the arse shot on the back). This makes a very decent album look tacky and dated, and I was genuinely embarrassed that anyone else should see it, especially after getting interested queries from those hearing the music as I reviewed it.

In the end, it’s the music that counts, and with that in mind I can thoroughly recommend this album. There’s not a dull moment to be had, not a track that begs to be skipped. If you’ve ever liked one of Phil Vincent’s many albums and projects, from solo to Legion, then Tragik will make you a very happy music fan.