STUD: ”Rust On the Rose” 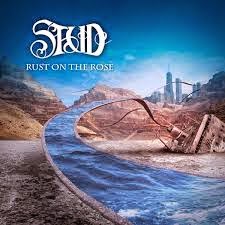 In Finland back in the mid 80's the heavy rock band Stud formed.  They caused quite a stir in their home country with their live shows and issued a single with lyrics sung in the Finnish language.  After less than a year they had changed singers and languages, switching to English lyrics but failed to secure a record deal for their planned full length album and they disbanded in 1989 after only three years.   Fast forward to 2012 and Stud had reunited with a new bass player, recording their debut album, Out of the Darkness for release in October 2013.  Approximately a year later and the Finns have returned to serve us Rust on the Rose, their sophomore effort.

The first single, ”I Don't Know” was available in May and the second, ”Rust on the Rose” broke just prior to the albums release.

Stud's Rust on the rose album starts off at full throttle with ”Raise Your Fist” beginning with a charging riff before a wicked guitar solo enters the picture.  I'm sold already and the vocals haven't even hit the speakers as yet.  The song is exactly what you might expect from an 80's glam/sleaze band, loaded with hooks and an anthem chorus.  I've raised my fist!  ”Rock n Roll World” exhibits a slightly slower pace, grinding along into a gang vocal, sing-along chorus of ”I want to live in a rock and roll world”.  I already do and thank God for that, but I'm still singing along!  The albums title track and second single release keeps things moving along in much the same fashion and other standouts include the catchiness of ”We're Gonna Strike”, the commercial radio friendly sounding ”Promised to be Mine”, the blistering pace of ”Break the Chains” and the lead single ”I Don't Know”.  Stud have issued a solid collection of 11 songs holding true the sound of the 80's guitar driven heavy rock,  marvellous for fans of the glam/sleaze sub genre.

It's off to add Out of the Darkness to my collection, rock on you stud!  \m/