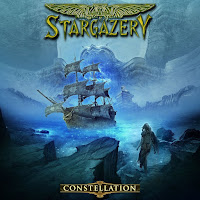 How time flies... I thought surely it hasn't been more than 3 years when I proclaimed Stargazery's previous album "Stars Aligned" as one of the best melodic metal albums of the year. Well that year was actually 2015! Anyway, the band, fronted by ex-MSG vocalist Jari Tiura and axeman/songsmith Pete Ahonen, does it again. "Constellation" is timeless, classic melodic metal with very few "modern influences". I don't know about you, but at least I have no problem with that.

Pasi Hiltula's keyboards and Pete Ahonen's guitar are pleasantly co-existing here, supporting each other rather than trying to steal the spotlight. Jari Tiura's majestic vocals are sounding better than ever. This album really shows how versatile he is and his tremendous range. The new rhythm section featuring bass player Marko Pukkila and drummer Ilkka Leskelä provide a solid foundation. The band is in good form these days.

The three tasters you may have heard already from this album have been good, but my real favourite tracks are among the other tracks. For example, "War Torn", the balladic "I Found Angels", "Caught In The Crossfire", "Dark Side Of The Moon" and "In My Blood" are all quite different to each other, yet all of them have some things in common - strong melodies and sharp hooks.

The press release states that the these songs are "strongly influenced by RAINBOW and BLACK SABBATH (Tony Martin era)". I won't argue with that, but I guess the biggest Rainbow influence is in the name of the band. I also had some flashbacks to Yngwie Malmsteen's "Eclipse", Joshua's "Intense Defence", Helloween's "Keeper of The Seven Keys" albums and seminal Finnish 80's heavy rockers Iron Cross.

I gave "four very strong R's" to the previous Stargazery album, now I have to add an additional small "r" to the rating, "Constellation" is a step forward.